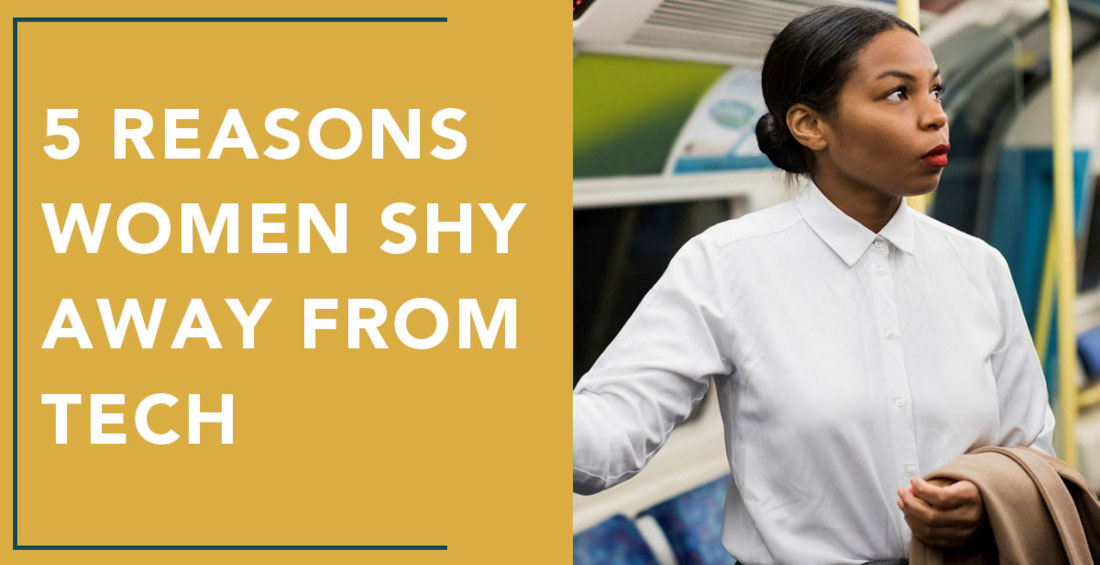 5 Reasons Women shy away from Tech

“You are too ambitious to pursue a career in tech.”

Have you heard that before? Perhaps it was told to you after you showed interest in pursuing a tech career.

Statements like that are not rare in a seemingly male-dominated world. You must have heard a lot of them. It is also one of the reasons why women shy away from tech. Some more examples of such absurd statements are, “Tech is not for women”, “Women can not handle tech careers”, etc. You can not imagine the number of women who have abandoned their dreams and aspirations in tech because of such stereotypical statements. Many women in today’s world shy away from tech because of these stereotypes.

Sadly, some cultures have driven it into the heads of women that they should always settle for less, or compete with men. Little wonder why many women in Africa are so reluctant to chase a career in tech.

Tech happens to be a male-dominated profession. Working as a woman among male colleagues, some of whom may be stereotypical, can be quite difficult. You may even come across business owners who refuse to hire you because they believe your male colleagues are more qualified than you simply because you are a woman.

Looking back in time, we can observe that there has been a significant decrease in the number of women settling or preparing for IT roles. What could be the issue? And who said women can not venture into tech?

In what I would call old Africa, it was believed that a woman’s place was in the kitchen. Many still hold on to this belief. Unfortunately, many women are still buying that idea even today.  What do you think? Do women only belong with pots and fry pans?

Tiffany Pham, Founder of Mogul once said, “When I look back to my younger self, I would tell myself to be confident first and foremost, to believe in myself, before anyone else because if I believe in myself, then others will too. And ultimately, this confidence and belief in myself would enable me to enable other women around the world. It’s about believing in your goals and what you are passionate about, and from that, others will become passionate about it too.”

You have so much capacity as a woman, and you have the ability to change the world’s tech story. The world is changing at a breakneck pace, and every day, more and more women are ascending to leadership roles in a variety of fields, including technology. Competent people who are good at what they do, whether male or female, are entering new sectors. Many firms now care less about a job seeker’s gender but how much they can offer, thanks to global sensitization.

With so many gender stereotypes going on in the world, even a low response to sensitization efforts, many women continue to shy away from tech. Whether you believe it or not, things are not always the way people make us see them. The big truth is that as a woman you may even become more efficient as a tech person than your male counterpart. There is nothing distinctive about a man that qualifies him to be a tech expert that you don’t have. All you need is the appropriate knowledge and skill to get started, and that’s exactly what we aim to provide.

5 Reasons Women Shy Away from Tech?

Many of our students and former students confessed that they shied away from because of the following 5 reasons:

One thing that fuels this mindset is that many women are not aware of a large number of influential women tech experts. Reading the stories of successful women in tech can go a long way to remove this mindset and replace it with a more appropriate one. Coding is not just for men, anyone who practices programming, whether male or female, can become an expert at it.

What comes to every lady’s mind when they hear the word ‘Tech’ is coding – and lots of it! They seem not to have the spine for it. This is not because they can’t but just that they feel it might be a little too much for them. But what if you can be a tech person and don’t have to code at all?  Lots and lots of questions are going through your mind right mind…slow down.

You may be one among those that have 0 interest in coding. That doesn’t mean you can’t land a tech gig. That’s the idea, many talks about tech jobs have been centred around coding and have stopped many women from seeing that they too can be tech people without having to write a line of code in their lifetime. Heels and Tech offers lots of tech courses that do not require that you write any code. Product  Design, Business Analytics, and Data Analytics are some of the tech professions out there that do not require coding skills.

Another issue that has pushed women to the back of the line in the tech is that they are underpaid. The pay scale seems to favour males in technology more than women. As a result, women tend to seek professions that will provide them with the sense of relevance they need, as well as the decent money that comes with it.

Knowing that there are persons that have gone ahead of you in a career or pursuit you want to venture into gives you a boost on a different kind of level. You have a sense of belonging and direction when you allow yourself to be inspired by their success stories and improvements. You can read some of the inspiring and soul lifting stories of our former students here.

All these including much more are the reasons women shy away from tech. Many women avoid a career in tech because they just can’t find the right place to learn. Some feel that there is too little value to offer. They face the ‘tech is for men problem’ in the learning institution. Well, this is the reason for the creation of Heels and Tech. We help women transition into tech careers with little or no prior tech skills. You can find out more about us here.

Want to get skilled up in Tech?

If any of these has been what has kept you away from rising to the demand in the tech industry even when you have the desire to do so, then your answer is nearer to you than you could have ever imagined.