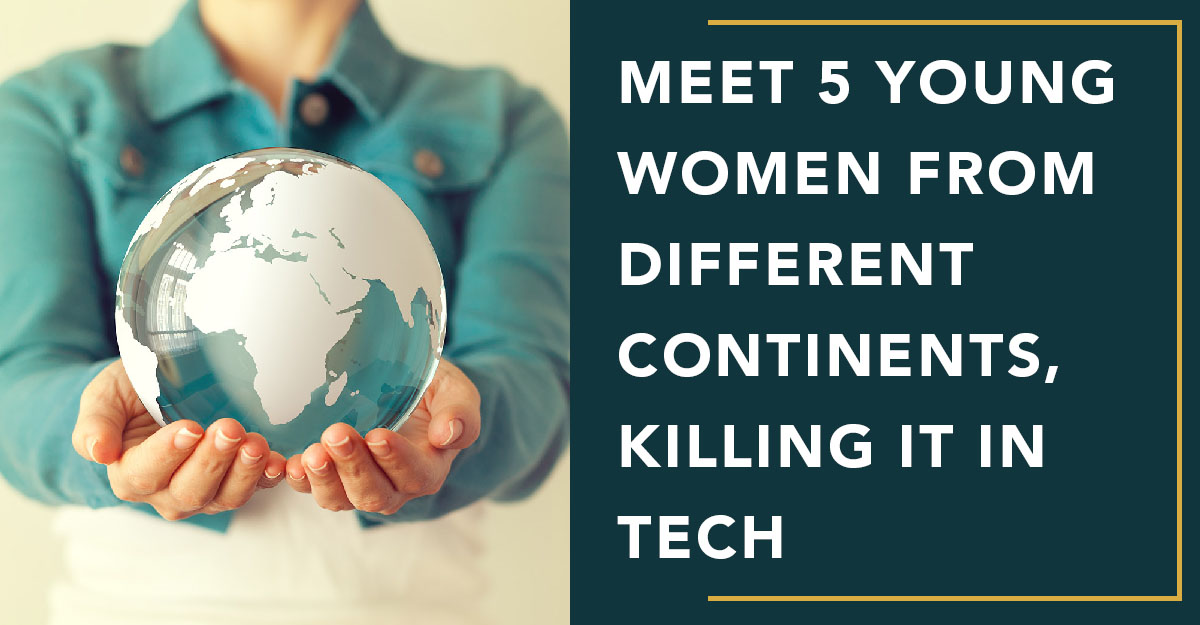 Meet 5 Young Women from Different Continents, Killing it in Tech

You will agree that right now, there are very few women making exploits in the tech industry. These women who choose to enter the tech industry are doing incredibly relevant work in the tech space. One by one they are changing the tech story. They are inventing and reinventing new products to turn the world of technology around.

The accomplishments of these women in tech who dared to enter the technology sector fascinate us. In the industry, these women play a variety of positions. They’re CEOs, entrepreneurs, engineers, and the list goes on. Without realizing it, we are all beneficiaries of these women’s tireless efforts all across the world.

Born in Cameroon, Rebecca Enonchong is an African technology entrepreneur who is one of the leading females in the tech industry in Africa. She founded AppsTech twenty years ago when it was particularly tough for first-timers, talk more of a black woman, to enter into the business world.

Rebecca moved to the United States with her parents while a teenager. She started selling newspapers subscriptions door-to-door when she was just 15. Due to her diligence and excellent work culture, she became a manager of the same company when she clocked 17.  Although a tech expert, Rebecca studied Economics at the Catholic University of America. This is where she obtained a B.Sc. degree and a Masters degree.

She is very passionate about watching women grow and achieve their goals. Having transitioned into technology herself, she tirelessly encourages women and men alike to take advantage of technological advancements in the world today. She believes no obstacle is big enough to stand in the way of anyone’s success if they stay determined. In her words,  “If a black African woman could succeed in America in 1999, then all the entrepreneurs across the world can succeed!”

Baratang Miya recognized she had to do something to guarantee that women and young girls from underprivileged homes had the chance to pursue jobs in the digital sector, so she started GirlHype in 2003, inspired by her personal experience with technology and a strong belief in women’s education.

Miya wishes to see more women in the digital sector by empowering young women via programming and app development training. She’s also developed a variety of tech clubs in and around Cape Town, South Africa, through GirlHype, including the Mozilla Clubs for Women and Girls, a club in collaboration with the UN that recruits allies and community leaders like Miya to promote online literacy and encourage gender inclusion in tech.

Thousands of girls have gained new knowledge of technology and the possibilities it may provide as a result of Miya’s efforts.

Leonida is the LDRI Research & AI Lead. She is also the owner of Intelipro, an African firm that creates analytics solutions for financial firms and retail businesses. Intelipro makes big data analytics super easy to access by organizations, enabling them to create new financial products and improve corporate processes.

She formerly oversaw the Research and Data Science teams at Nairobi’s Innovation Hub, iHub. In these roles, she led a group of indigenous academics in an innovative study on the applications, methods, and techniques to technology in Africa.

She formerly worked at Nairobi’s Innovation Hub, iHub, as the Director of Research and Data Science. In these capacities, she led a group of local academics to do ground-breaking research on the use and approaches to technology in Africa. She is passionate about creating brilliant analytics solutions in Kenya and other African countries.

Samantha is the co-founder and chief technology officer of Hopscotch, a smartphone app that allows kids to develop and share their own mobile games.

She founded Hopscotch with educator Jocelyn Leavitt when she was 26 years old, after seeing a shortage of women and people of color in engineering. Hopscotch is the first programming language created specifically for touch screens. John and Leavitt wanted to develop a programming language that was basic enough for kids to learn while also allowing them to be creative. Hopscotch, a game for kids aged eight to twelve, had 20,000 downloads in its first week.

Samantha studied applied math and worked as an engineer before deciding that programming was her passion.

Popularly known by her work title, ‘Security Princess’, Parisa Tabriz is Google’s secret weapon when it comes to web security. Her story is particularly inspirational as she rose above what society thought and succeeded as a woman in technology. ‘Security Princess’ has become a role model to hundreds of women in Silicon Valley. This where it is mostly believed that women often struggle to get to the top. Not only is she a woman thriving in an industry hugely under-represented by females, but she also leads a team of 30 tech experts in the US and Europe, mostly males.

Forbes named her one of the 30 under 30 technological pioneers in 2012. Her work extending encryption on the web earned her a spot on WIRED’s Next List in 2017. She graduated from the University of Illinois with a master’s degree in privacy-enhancing technologies and wireless security (Urbana-Champaign).

Samantha is one of the 30 under 30 pioneers in technology by Forbes in 2012. Also, she was included on WIRED’s Next List in 2017 for her work advancing encryption on the web. She has a Master of Science degree in privacy enhancing technologies and wireless security from the University of Illinois (Urbana-Champaign). Samantha is one of the women in tech that cannot be overlooked.

In 2017, she was featured on WIRED’s Next List for her work pushing encryption on the web, and in 2012, she was selected by Forbes as one of the 30 under 30 pioneers in technology. Now that’s a woman taking the bull by the horn in a man’s world you’d agree. Our princess is doing big things and she’s making us super proud.

You Too Can Become That Powerful Tech Woman Of Your Dreams!

You can be what you want to be, don’t forget that!

We’re pretty sure that if you work hard at it, you would be really surprised by how smoothly you’ll transition into tech. Many women have nailed it, these women you’ve read about today nailed it, nothing is stopping you!
If you’re looking for the right place to gain the tech skill to Kickstart your tech career, Heelsandtech! Enroll in any of our amazing courses and get on with it already. Click here to check them out.

Tag: women in tech
Previous Next